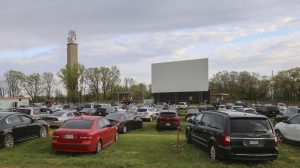 In a season of many changes for graduates, 21st Century Charter School of Gary moved its commencement to the 49er Drive-In Theatre Monday evening. 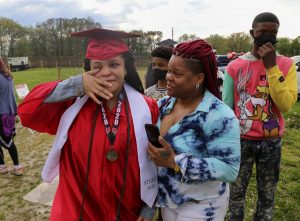 “I like that we’re all here,” said valedictorian Andrenia Hall, who hopes to become a doctor.

The 49 graduates experienced an evening of speeches, videos and slide shows, and one last opportunity to be together, albeit at a safe distance.

“It’s great to have the opportunity to do something special for the kids,” Assistant Principal Joshua Craig said. “At least we have a way of having everyone together.”

Drive-in owner Mike Cotton said this was the first outdoor ceremony of this type at the Theatre, which opened in 1956. Principal Kevin Teasley approached Cotton about the graduation ceremony.

“In what has been an unbelievable year, we are able to do something unbelievable and neat for our graduates,” Teasley said.

Families entered the drive-in, where the graduates-to-be found chairs with their names and protective masks and gloves. Families and friends remained in their vehicles throughout the ceremony, listening to the program on the radio. 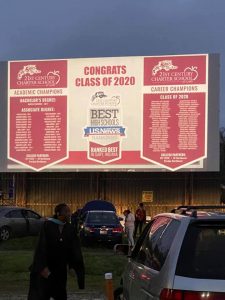 Following speeches and the presentation of diplomas, the program featured a video on the movie screen of the 21st Century boys’basketball team that won its fifth straight sectional before the coronavirus pandemic ended its season, along with a slide show of the senior class.

Teajawon Pellebon, who plans to continue barber classes, said through the outdoor ceremony, “we get to embrace each other and be with the people we studied with.”

Michelle Barnes, a mom, was tearing up as she helped daughter Evonn Posey with her cap and gown. “This is for the kids,” the mother of the future Indiana University finance major said.

Many of the students wore gym shoes, including Kendall Means, who had custom-made shoes with a cougar paw for her school mascot.

“We gotta go out in style,” said Means, who is headed to Ball State.