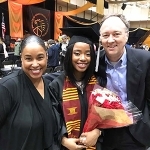 When Raven Osborne was in third grade, her teacher told her that the classwork was too hard for her and she wasnt an A student.

The 18-year-old just picked up her college diploma two weeks before she even graduates from high school, and shes doing it as a straight-A student and valedictorian.

Im happy about the situation, says a modest Osborne, who graduated with a bachelors degree in sociology from Purdue University Northwest but is still finishing out her last few weeks at 21st Century Charter school in Gary, Indiana, a free public school in a city beset by high poverty and dropout rates.

Shes a ceiling-breaker, a mold-buster, an incredibly disciplined young lady, Kevin Teasley, CEO of the GEO Foundation, which operates 21st Century, tells PEOPLE. The world is her oyster now.

The school requires students to take at least one career-certificate or college class, and provides the transportation, textbooks and tuition to do so. Six other of the schools 43 high school graduates earned two-year college degrees this year and he hopes that 100 percent of the graduating class of 2020 will obtain associates degrees or higher, Teasley says.

Worried about college debt from an early age, Osborne decided to take as many college classes as she could while the costs were covered, she tells PEOPLE. The summer after eighth grade, even before her freshman year of high school had begun, she enrolled in her first college class.


I was just thinking I didnt want to waste any time, she says.

For the next four years as she was taking English, geometry, history and other typical high school courses she simultaneously took college classes online, over summers and at a community college before enrolling at Purdue University Northwest in nearby Hammond.

Her high school accommodated her hectic schedule, allowing her to squeeze in college classes during the day and ask for homework assignments if she missed anything, she says.

Osborne says she doesnt feel like she lost out on anything during her high school years. She still went to movies, baseball games and bowling with friends and took a summer vacation last year.

Maybe I didnt do as much as my classmates have done, but I dont feel like I sacrificed that much and I dont have any college debt and that is amazing, she says.

Osborne credits her mother Hazel Osborne, a single mom who works as a physical therapist, with supporting her (she disputed the third grade teachers assessment!) and instilling in her a drive to succeed.

Ive been in a household where education has been valued, says Osborne, adding that she was encouraged to read literature, express thoughts and offer opinions at twice-weekly meetings at her Jehovahs Witness Kingdom Hall, skills she later put to use in college classes.

Even after she graduates, Osborne wont be going too far from the high school. Already an intern working with second graders at 21st Century, shell return to the place where she once qualified for a free lunch to work as a reading intervention specialist earning a $38,000-a-year teaching salary.

And with a minor in early childhood education, Osborne is planning to earn her teaching certificate and wants to become a teacher.

I hope it sends a message, she says of her accomplishments. I think it can teach students that college is something they can attain. The conditions of a city dont define its people.