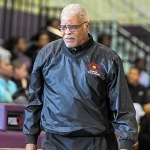 Rodney Williams, the only boys basketball coach 21st Century has known, took the job in 2008 because it was time to get warm.

Williams was a football coach by trade. “It was cold outside,” he said. “I wanted to move inside.” Williams, the Post-Tribune 2016-17 Boys Basketball Coach of the Year, isn’t going back to his roots.

He has, in his words, “never had more fun coaching” than he has in basketball.

He is a Gary lifer, returning to the city after graduating in 1977 from Northwestern.

Williams sold insurance for a while before becoming a sales director for the Hoosier Lottery.

The one unifying thread though his post-college life is coaching. He loves it. Loves the kids. Loves the camaraderie. Loves the challenge.

He was an assistant football coach at Mann, Lew Wallace, Wirt and Roosevelt.

Williams coached a Gary Pop Warner team. And he had stints as a coach at Holy Angels and with the Runnin’ Rebels, a Gary AAU basketball team.

When 21st Century was formed as a charter school, Williams was asked to help form a basketball program.

His first move was to suggest that the school hire Ricky Haskins as the athletic director. Haskins hired Williams as the basketball coach and Williams brought on Larry Upshaw, who had coached with him as an assistant with the Runnin’ Rebels.

The three have been grinding away for nine years now. Williams said it truly is a group effort.

“Larry and Ricky get a piece of this award,” he said. “I couldn’t do this by myself. These guys are important to my success. I owe them everything.”

21st Century first started competing in the IHSAA in 2010-11. The Cougars won their first sectional in 2013.

This year, Williams, the kids and his staff added to their profile when the team won its second straight regional by defeating Oregon-Davis in the championship game of the Class A Triton Regional.

The Cougars upset Tri-County in the opening game, winning by 12 points. The Cavaliers were ranked No. 2 by the Associated Press in the Class A poll.

It was a victory Williams didn’t expect at the beginning of the season.

As the year wore on, though, Williams could see 21st Century was ahead of schedule.

“I thought we would be good but I thought we were a year away,” he said. “I didn’t think we’d get this far this quick.”

Williams said they were helped by the contributions of Johnell Davis, a 6-foot freshman guard who averaged 13 points, and the return of junior guard Chris Rogers.

Rogers moved to Texas for his sophomore year and then returned this season. He started at 21st Century as a freshman.

The Cougars (19-9) lost to Lafayette Central Catholic in the Lafayette Jefferson Semistate. Catholic was ranked No. 1 in state.

Williams can’t wait for next year when he believes another tournament run could occur.

“I think we have a really good shot at getting back there,” he said.