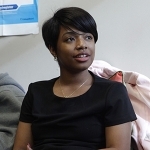 GARY Raven Osborne has an amazing story to tell. The 18-year-old high school senior at 21st Century Charter School in Gary will earn a bachelor’s degree in sociology with a minor in early childhood education from Purdue University Northwest on May 5, the same month she will earn a high school diploma from the charter school. Osborne said it was tough going to high school and taking college classes. There were times when she wanted to quit, but her mother, Hazel Osborne, constantly encouraged her and told her she could do it.

Osborne, who attended Bethune and Brunswick schools in the Gary Community School Corp., has been at 21st Century Charter School for six years.

As a high school freshman, she began taking dual credit classes at Ivy Tech Community College Northwest in Gary and earned an associate degree in general studies. “I wanted to try for the bachelor’s, but I wasn’t sure if I could do it,” she said.”My mother told me to talk to Mr. (Kevin) Teasley. I was nervous about it. The worst he could tell me was no.”

Teasley is president/CEO of the Indianapolis-based GEO Foundation, which operates 21st Century Charter School in Gary, and he serves as school superintendent. Teasley said Osborne told him she had a problem and would be earning her associate degree by the end of the summer before her junior year. She said she wanted to stay in school and graduate with her peers.

“I checked with the state,” he said.

“The state said it’s fine for her to keep taking college classes. There is no upper limit on college courses. So she enrolled at Purdue, and we have been paying her tuition each semester. Students take classes in the summer to free up their schedule during the school year for college classes. Raven takes a few classes at 21C, and she is currently interning in our elementary school.”

In August 2015, Osborne enrolled at Purdue University Northwest’s Hammond campus. She needed to earn another 60 credits; over the next two years, she did just that. Each semester, she has taken five classes, or 15 hours, at Purdue, while simultaneously taking classes at the charter school, though she’s only needed to take two or three classes at the high school.

Purdue associate professor of sociology Ralph Cherry, who had Osborne last spring in research methods, did not know Osborne was a high school student. He said she performed better than almost all the high school students he’s ever had in class.”That’s very impressive. Research methods is the most demanding class that I teach,” he said. Purdue spokesman Wes Lukoshus said the university is proud of Osborne’s achievements.

“She not only is academically gifted, but (also) has demonstrated amazing intellectual maturity in her pursuit of a baccalaureate degree at Purdue Northwest. She is joining a small number of students who have come to our university at a relatively young age to complete a baccalaureate degree program,” he said.

Osborne isn’t the only senior who has excelled at the charter school. There also are Gregory Clark, Shantaniese Davis, Raven Skinner, D’Nesha Young and Chene Hightower, who have all earned associate degrees in general studies from Ivy Tech Community College Northwest. They will graduate May 13, and all have been accepted to universities.

Seniors Ashley Burton and Mya Stipe earned a Professional Technical Certificate, a one-year degree, in general studies. As for Osborne, she never told anyone at Purdue that she also was a high school student, she said. She doesn’t drive, and her mother took her back and forth to university. This school year, the charter school transported her.

“It was very hard,” she said. “At one point, I also tried to work a job. I was working a midnight shift at a day care center. I just had to watch the children while they were sleeping, then feed them breakfast when they woke up. It was a daycare for parents who worked a night shift. It just got to be too stressful, and I had to resign in December.”

21st Century’s Teasley said, “The key thing about Raven and the others is that they were able to achieve more than traditional schools expect of them.”

“We believe all students can achieve more and they will, if we support them. Imagine the impact on Indiana if all schools believed and operated the way we do. Our belief in our kids helps them stay in school and complete high school. The college experience they receive while attending our high school gives them the confidence to … complete college, too. It’s pretty cool accomplishments.”

She has been hired by the school and will be called an early interventionist, working in the elementary building this fall. She will earn $32,000 per year. Osborne will be 19 Aug. 22.

The students got together this week in an upstairs school lounge to talk about their journey and future goals.

Burton has been accepted to Indiana State University in Terre Haute, and has several scholarships. She plans to become a forensic scientist.

“I want to come back home and work. I hate to say it but we have a high crime rate and I want to help out with that,” she said.

“Last year was really rigorous for all of us,” Burton said. “We were on the (Ivy Tech) campus a lot. We were all working to get our credits completed. Some of us also had online classes. It’s teaching us that college is no joke but we’ve come this far. It’s taught us we can make it in college.”

Hightower will attend Ball State University majoring in music performance and child development/psychology. He also was accepted to several other schools including Valparaiso University.

Young will attend Indiana University-Purdue University in Fort Wayne and major in psychology. Young also operates a house cleaning business with her sister. In addition, she works with other family members who assist people released from jail in finding a job.

“Being in college forced us to be really independent,” Young said, adding she’d like to return to the area and start another business in her hometown.

Skinner has been accepted to Indiana University at Bloomington, and will major in social work and minor in psychology, with the goal of becoming a social worker. She’s also doing an internship at 21st Century Charter School’s elementary school in the social work department.

Principal Anthony Cherry said the students are all “super personalities.”

Cherry said the school, which grew by 270 students this fall, now has 895 students; the high school has 420 students. All 43 seniors will graduate in May. The school has been rated a C by the Indiana Department of Education. It is authorized through the Office of Charter Schools at Ball State University.