21st Century has a Lott more than Eugene German 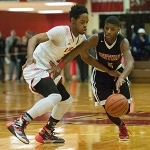 GARY Core’Von Lott was playing basketball inside the gym at 21st Century a couple of summers ago when his phone rang. It was his mother, who told him he had been accepted as a student into the Gary charter school. Lott was working out at the time with Eugene German, the prolific scorer who graduated last June and is now starring at Northern Illinois.

“He said, ‘All right, little brother, congratulations,'” Lott recalled. “Then he said, ‘Let’s get to work.'” For two seasons, the 5-foot-9 Lott played in the shadows of German, who made the Indiana All-Star team last summer and was named MVP of the game against Kentucky in Indianapolis.

Now, it is Lott getting the headlines for 21st Century. He scored 35 points in the opener against Morgan Twp. in last week’s Kouts Sectional opener. He scored 23 against Washington Twp. in the semifinal and 20 against Westville in the championship game.

On Saturday, the two-time sectional champion Cougars (17-8) will play Tri-County (23-2) in the Class A Triton Regional.

“Eugene took me under his wing,” Lott said of German. “He showed me how to work hard. He showed me what it took to be a varsity player here.”

Lott was born and raised in Chicago, where he stayed until he was 7. After moving to Gary, he attended several schools — Charter of the Dunes, Bowman Academy, Ambassador Christian Academy and Roosevelt — before joining coach Rodney Williams in the heart of the city.

But baseball was Lott’s first love, the favorite sport of his father Cedric, who died when Lott was in eighth grade. That was the year he first started taking basketball seriously.

“Core’Von’s a great kid from a great family,” Williams said. “I love the kid. But I’d love him more if he’d play a little more defense.”

Williams’ laughter echoed inside his office before Monday’s practice started. Williams thought his team was a year away from being able to make a run. But here they are. Again.

“He’s one of the best shooters we have,” Williams said of Lott. “He was a great complement to (German), but he was waiting for him to leave so he can show everyone what he can do.

“He can score. Core’Von can score.” Lott has a couple of colleges looking at him and he plans on playing at the next level, where he plans to study athletic training and physical therapy.

He has a high motor and has a goal that carried him up the ladder in Porter County last Saturday and kept him hanging nets. “I’m not ready to go home,” Lott said. “Coach told me that even though we made it to semistate last year, that isn’t my legacy. That’s Eugene’s. I have to make a name for myself.

“We have to be on our best behavior at Triton. They want us to act out. Just like last year, the crowds will be big. We have to be ready when the lights go on.”