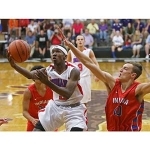 BLOOMINGTON Allen Iverson was known as The Answer during his NBA career. Eugene German sharessome Iversonlikequalities with his ability to shake defenders and score around the rim. Tremell Murphy has a different nickname ready for German, his IndyStar Indiana AllStarsteammate.

Hes like a walking question mark, Murphy said. You dont know what hes going to do. Opponents cantguard him. Hes unbelievable. Ive never seen anybody play like him at the high school level.

There were questions about the 6footGerman, even after his selection to the Indiana AllStars.

That may besurprising, considering he led the state in scoring for two consecutive years at Gary 21st Century, a Class Aprogram that has only been sectional eligiblesince 2012. Only four other players have accomplished that since 1979-80,the latest being 2010IndyStar Mr. Basketball Deshaun Thomas.

But if fans hadnt heard much about German before this week, they arent alone.

10 things to know about the Indiana All-Stars

He shocked me, said Tech guard C.J. Walker, who is Germans roommate this week. I heard he averaged like 30 somethingat 21st Century. I knewhe could score. Im just seeing it in person now. Hes showed it and proved it.

The Northern Illinois recruit came off the bench to lead the AllStarsin scoring on Tuesday at Bloomington South, going for 19 points in a 11896winover the Junior AllStars

He hit a couple of long 3pointers,but most impressive were his drives to the rim. He finished once with an underhand scoop shot that would have scored somewhere betweenunlikely and impossible on the level of difficultyscale.

Germans performance added credence to his 33.5 pointscoring average as a senior. He led 21st Century to a 207record and a Class A semistateappearance, where the Cougars lost to state champion Liberty Christian. German scored 40 or more points nine times as a senior, including a 51 pointexplosion in an 81-71loss to La Lumiere, a prep school power.

Despite all of those impressive numbers, German was far from a shoo-infor the AllStarteam. He knew that prior to the Top 60 Senior Workout inearly April at Marian University.

If I didnt go to the Top 60 Workout, I definitely wouldnt be on this team, he said. I talked to my dad and he said I needed to go down there and bustmy butt. Most people didnt know about me. I led the state in scoring but they didnt know about me until then.

Indiana All-Starsdirector Charlie Hall called Germans performance the best Ive ever seen at a Top 60. If he was on the bubble before, Germanvalidated his spot on the 13 playerroster that day.

My first nine shots went in, he said. I worked hard all that week and willed my way onto the team.

There are players on the AllStarroster who were familiar with Germans game prior to the Top 60 Workout and All-Starweek. Murphy, from Griffith,and East Chicago Centrals Damien Jefferson were teammates with him on the grassroots SYF team from northwest Indiana.

German attended 21st Century as a seventh andeighth graderbefore transferring to Andrean as a freshman. He was planning to attend GaryRoosevelt as a sophomore but returned to 21st Century when Roosevelt coach Renaldo Thomas was replaced.

He showed hes supposed to be here, said Murphy, who scored 10 points on 5 for 5shooting on Tuesday. Hes a phenomenal player. Its abouttime other people recognized hes this good.

German has basketball ties in his family. His father, David German, was a point guard at Gary Horace Mann and graduated in 1982. His older sister,Princess German, starred at Gary Bowman and the University of Indianapolis. She set a UIndy single seasonrecord for points last year as a senior,averaging more than 21 a game. Older brother David German Jr., also was a standout at 21st Century.

My dad taught me everything about the game, Eugene said. He couldnt shoot as well as me. Im not a great shooter, but they didnt have the 3pointline when he played. So he would get to the basket and penetrate.

German wasnt heavily recruited. He jumped on the Northern Illinois offer, he said, because he felt he could compete for playing time right away. Plus,its not far from home. The Huskies won 21 games last year under fifth yearcoach Mark Montgomery.

(Montgomery) said he likes scoring guards, German said. I like to score. Everybody knows that.

Playing this week for the All-Starsfulfills a dream German has had since the fifth grade. He plans on making the most it.

Im always fired up, he said. Im aggressive on offense and defense. Thats how I like to play.

No question about that.

21st Century Graduates All of Their Seniors, Most Off to College
Proof Positive: Our Model Works!