21st Century Graduates All of Their Seniors, Most Off to College 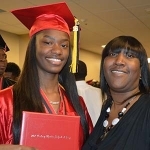 GARY In the gymnasium of the 21st Century Charter School Monday night, all 34 of the school’sseniors graduated. This year is the second time in the last three years all of the schools seniors graduated, according to Greater Educational Opportunities (GEO) Foundations website.

According to the GEO Foundation, out of the 34 graduates, 32 have been accepted to a college oruniversity. Six received academic honors degrees. Two received a Technical Certificate in Educationfrom Ivy Tech. All of them walked the stage Monday night to receive their diplomas in front of anenthusiastic crowd of friends, family and administrators.

One by one, the seniors walked into the gym, each met with an applause that rivaled the cheers of afootball game. Valedictorian Johntrell Bowles and Salutatorian Diamond Brown led the way, walkingthrough a tunnel of school administrators and the 21st Century Board of Directors. Bowless cap wasdecorated with the logo of the University of Virginia, where he is headed in the fall.

In his address, Principal Anthony Cherry reminded students of four values: positivity, productivity, beingpurposeful citizens and perseverance, matching each characteristic with a graduate.

Christel Heath participated in three sports and maintained a GPA above a 3.0, while managing to staypositive. Eugene German was a key player on the basketball team, churning points for productivity.

Daniel Jacox is a purposeful citizen by serving in the Air Force. Rajanae Davis persevered throughpersonal struggles to graduate.

With each mention, the seniors cheered their classmate. However, no statement received as muchapplause as Senior Class President Kymuntae Noras final statement in his welcome address: