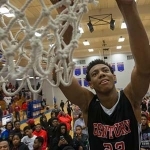 IndyStar Indiana All-Star games director Charlie Hall had a pretty good idea of how the All-Star roster would shake out before Sundays Top 60 Senior Workout at Marian University.

If Hall had any doubt about Eugene German, a 6-foot guard from Gary 21st Century, he was convinced otherwise after the workout.

I dont want to go overboard because the Top 60 isnt necessarily a tryout for the team, Hall said. But German probably had the best performance Ive ever seen at a Top 60. He validated his spot on the team.