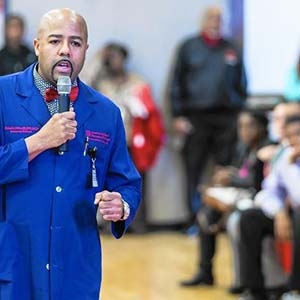 Johntrelle Bowles saw the aftermath of shooting violence in Gary first-hand when he served as a volunteer in the emergency room at the Methodist Hospitals Northlake.

“I’m originally from Harvey, Ill., so I know about violence,” he said while watching Tuesday’s rally against violence at 21st Century Charter School where he’s student body president.

Bowles and fellow student, Da’Ione Fields, along with Dr. Michael McGee, organized a new youth movement called Students Against Violence Everywhere, or SAVE, to promote peace and healthy choices in Northwest Indiana. Tuesday’s event at 21st Century Charter was the first rally that organizers hope will spread to other Gary schools.

McGee, who founded Project Outreach and Prevention, said he started it after treating young wounded men in the emergency room, where he’s the emergency department medical director.

The program also satisfies trauma designation criteria for the hospital.

“The mission of the organization is to prevent and alleviate youth violence and to encourage young people in career paths,” he said.

Gary Mayor Karen Freeman-Wilson said it’s important for the students to become the best citizens they can be.

“We are counting on you, not just for your future, but for our futures and the future of this community,” she said.

Bowles, 18, who intends to study pre-med at the University of Virginia, said he’s put in 423 hours of volunteer work at the emergency room and it’s solidified his decision to become a physician.

“The whole part of living is to give back,” he said.

Bowles said students at his school will dedicate every month to a different issue that impacts them to promote smart choices. April, for example, will focus on safe driving.

“We are honored to be the first school,” he said.

To learn more: Visit the Northwest Indiana Project Outreach and Prevention on Teen Violence at nwipop.org