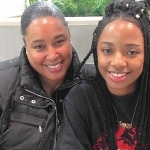 Raven Osborne and Awanii Nicholson have never met and likely never will.

Their paths almost crossed earlier this week when I met with them just minutes apart for two separate columns. But after hearing their stories I realized the two women’s lives are somehow intertwined, like a classroom and a lesson plan.

Nicholson, 38, has always regretted not graduating high school, and has been slowly crawling up the educational ladder. The single mother of two teens has experienced homelessness but never hopelessness.

Osborne, 17, was a shy stuttering student who was once told by a teacher that she simply didn’t have what it takes to succeed. She’s currently earning a bachelor’s degree at Purdue University Calumet, after already earning an associate’s degree, while still attending the 21st Century Charter School at Gary.

At 17, Nicholson left Lew Wallace High School in Gary to help care for her mother. She never returned to school. Her mother died and so did Nicholson’s plans for a diploma. That summer, she got pregnant and later earned a GED. She’s worked at several low-paying jobs, barely scraping by to raise her two children, Anthony, 13, and Minnie, 18.

“Life has been a struggle for my kids and me,” she told me at a restaurant near her apartment in the Miller section of Gary. “I never qualified for government housing assistance, but I did not want my children to grow up in the ghetto either.”

Awanii Nicholson, 38, of Gary and her 13-year-old son, Anthony, have been homeless but are using education to pull themselves out of poverty. (Jerry Davich / Post-Tribune)

A couple years ago, Nicholson and her kids lived in a shelter until finding more permanent housing. Along the way, she always stressed education to her kids.

“I may not have been able to provide them with much, but when it came to education, I did my best,” she said.

Osborne has been doing her absolute best since attending the 21st Century Charter School in seventh grade. She is an accomplished student at the school, and currently the only one earning her bachelor’s degree while attending high school classes.

“Raven blows me away with her effort, focus and maturity,” said Kevin Teasley, founder and president of the GEO Foundation, which operates the school. “She is amazing, beating all the odds and doing much more than many traditional school students ever do.”

Those long odds include Raven being the only child of a single mother, Hazel Osborne, who drove her daughter to meet with me. Hazel, a physical therapist, sat at a nearby table while I chatted with Raven, who’s shy but focused.

“When I was a younger, I was labeled with a learning disability,” Raven Osborne said. “But my mother always told me I could do whatever I wanted to do in life.”

Ever since that day in third grade when she was told didn’t have “it” by a teacher, she’s had it going. She is top of her class, already with an associate’s degree in her pocket (at age 16) and plans to earn that bachelor’s degree by 2017.

“I want to walk with my graduating classmates to get my high school diploma,” she told me politely.

“We offer dual-credit programs on steroids,” he said. “We want our students to excel as much as they can and we will support their efforts.”

Osborne is the seventh student at that school in the past four years to earn an associate’s degree. She’s the only one earning her bachelor’s.

“Maybe once people learn what Raven is doing, others will follow. We hope so,” Teasley said. “Most of our students come from homes void of high school diplomas, much less college degrees.”

This described Nicholson’s home until recently.

In 2013, she enrolled in Gary Middle College, a second-chance high school located near the charter school. While attending classes there, she honed her talent for writing poetry with help from a kind-hearted teacher, Nora Glenn.

“I hadn’t had my hands on a pen and paper in years. It felt great,” Nicholson said.

Her back story of homelessness is a lengthy one, bouncing around from family members, even a short stay in Kansas City with her kids. Like I said earlier, an entire column could be used to detail her struggles against poverty.

Still, while struggling to find a permanent home in Gary, she took classes, raised her kids and eventually earned that long-elusive high school diploma.

“It was something I had wanted for 20 years,” she told me.

Nicholson started taking classes at Ivy Tech Community College, studying early childhood education until her financial aid ran out. She would someday like to open a preschool or learning center for youth.

“I believe children are our future, and teaching them is the greatest investment in the world,” she said. “All it takes is one voice. I want to be that voice.”

Osborne also is taking college courses on early childhood education and related subjects. She wants to someday be a social worker to help Gary youth.

“I want to stay here and give back to others who want to do what I have done so far,” she said.

All it takes is another voice. She wants to be that voice.

On the day I met Nicholson, she had just received a letter from the Indianapolis Housing Agency, approving her request for Section 8 housing through government assistance.

With its approval, she can now move to Indianapolis so her daughter, Minnie, can attend college at Indiana University-Purdue University Indianapolis. This means the world to Nicholson, that her daughter is bound for college.

“We’re so excited. We’ve been waiting on this opportunity,” Nicholson said, showing off that approval letter.

I asked both women about the importance of education, at any age.

After thinking about it for a few minutes, Nicholson replied, “Education is the key to ending poverty.”

Osborne didn’t have to think about it: “Education is everything,” she replied instantly.