Eugene “The Truth” German continues to amaze at 21st Century 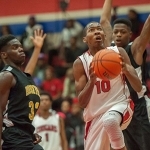 GARY The basketballs were bouncing behind the Gary home. The older brother and sister dribbled between the orange cones, then shot one jumper after another.

On and on and on the scene played out.

Off to the side, a bench sat on the grass. The little brother, Eugene German, looked on. The 4-year-old’s feet didn’t reach to the ground, dangling back and forth awaiting his turn in the game. And it didn’t take long.

“They knocked me down about a million times when I would go to the basket when I was little,” Eugene said with a laugh. “But it was good. I had to get stronger.”

When he was 9, Eugene’s right arm was tied behind his back during drills. It forced him to use his left. Hour upon hour he played.

“That helped me big time,” Eugene said. “Now, my left hand is just like my right hand when I go to the basket.”

His sister, Princess German, was a star at Bowman Academy, and his brother, David German Jr., was a standout at 21st Century. Scoring points is the lifeblood of this basketball family.

Eugene is the defending leading scorer in the state of Indiana, scoring 32 points per game last season. The senior point guard at 21st Century is leading Indiana right at 32.6. Cougars coach Rodney Williams knows the treasure he has on his roster wearing No. 10.

Winning one scoring title in Indiana is quite an honor, but back-to-back is very rare.

The only winners from Northwest Indiana in that stretch were Michigan City Rogers’ Dan Palombizio in 1981, Morgan Township’s Steve Hendershot in 1982 and Wheeler’s Todd Schafer in 2003.

“I have three goals this year,” Eugene said. “I want to win the scoring championship. I want to take my team to state. And I want to make the Indiana All-Star team. And I couldn’t have done any of this without my family.”

David German Sr. graduated from Horace Mann in 1982. He, like his son, played point guard. Mann won the city championship in 1981. In 1982, they beat the top team in the nation, Chicago Phillips.

“But we couldn’t get out of the sectional,” David said. “It was so tough.”

David’s wife, Eugenia, ran track at Mann before graduating in 1990. When the two started their family, basketball was in the pulse and breath of their days.

“We did it for exercise,” David said. “We wanted them in good shape. But they all fell in love with the game. The kids all played basketball and pushed each other to get better.”

How important is the game to Eugene? On both Thanksgiving and Christmas, he went to the gym to work out. And in the summer, he runs the Dunes with a weighted backpack on his shoulders.

“Princess had a great influence on him,” Eugenia said. “He was always trying to beat his sister. When he was young, all he wanted to do was beat his brother and sister. He finally beat David Jr. for the first time this year. There was a big celebration. He can’t stop talking about it.”

When the balls stop bouncing behind the house, Princess, David Jr., Eugene and sister, Precious, love sitting down and watching horror movies. The scarier the better.

Princess started her college career at Wisconsin-Milwaukee, but is now a senior at the University of Indianapolis. She gets calls from Eugene all the time, and it’s usually about bragging rights.

Princess’ career-high was 46 points against Hobart. Eugene scored 55 against Fall Creek Academy last year and just had 51 against LaLumiere.

“He always calls me about a record,” Princess said with a laugh. “He’s really, really quick, and he was a quick learner when he was little. He never quit. He was going to make a name for himself regardless of what I did. It’s nice he looks up to me. We pushed him hard, beat him up in the backyard.

“But I knew he was going to be a player when he was little.”

Another family member is also close to Eugene’s heart, his uncle, Charles German. He died of cancer in August, 2014. Geno thinks of him every time he walks on the basketball floor.

“He was like my best friend; it’s unexplainable,” Eugene said. “He would pick me and take me for rides in his truck. We’d have long talks about everything. He made me stronger. I remember he always bought me these big, old Popsicles.

Eugene also appreciates the efforts of Cougars assistant coach Larry Upshaw, Geno’s personal trainer. The hours the two put in on the shores of Lake Michigan in the summer are almost countless.

“I couldn’t have got here without him,” Eugene said.

German was named the MVP of an eighth grade all-star game at Purdue-Calumet with players like Damien Jefferson of E.C. Central and D.J. Wilkins of Merrillville playing in it. He went to Andrean as a freshman. He was headed to Roosevelt for his sophomore season but went to 21st Century to follow in his brother’s shoes.

German will play for Northern Illinois once his high school career is completed.

It’s not just what his family or coaches say about him, but what others in the Region said about No. 10.

“Eugene German is one of the best in the state,” Hammond coach Larry Moore, Jr. said.

And Griffith coach Gary Hayes, when talking about his defensive specialist Al Ervin, said this about German.

“The only kid Al couldn’t stay in front of was German,” Hayes said. “The kid’s tough.”