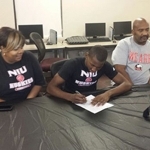 CENTIER BANK PERFORMERS OF THE WEEK

The Centier Bank Performers of the Week are Gary 21st Century senior basketball player Eugene German and Mishawaka senior basketball player Jordan Arch. In Tuesday’s 88-73 win over Hammond, the 6-foot German tallied 40 points on 15-of-20 shooting from the field, including 3-of-6 from 3-point range. The Northern Illinois recruit was also 5-of-9 from the free throw line with three rebounds, six assists, and two steals. In Friday’s 99-62 decision over Lighthouse CPA, German scored 34 points on 13-of-31 shooting with two rebounds and five assists. He is averaging 30.5 points per game for the Cougars (8-4).

The 6-foot-1 Arch played a big role for the Cavemen (7-4) in Friday’s 67-59 upset of No. 6 (Class 3A) Mishawaka Marian by knocking down eight 3-pointers and finishing with 26 points. Arch also tallied 12 points Tuesday, including three 3-pointers, with five rebounds in Mishawaka’s 64-43 loss to Elkhart Central. He then added five points in Saturday’s 59-44 win over Niles (Michigan).

The Centier Bank Performer of the Week is open to any male/female student athlete who participates in any IHSAA sanctioned sport and whose school is in the Centier Bank geographic area.