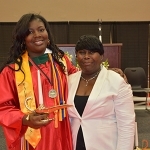 21st Century Charter School at Gary enjoys a special partnership with Ivy Tech Community College, in the form of a dual credit program. High school students at 21c have the opportunity to take college classes during traditional school day hours on-site at the nearby Ivy Tech campus. In order to graduate from high school at 21c, all students must earn at least 3 credit hours of college classes.

This means that on any given day, high school students are traveling back and forth from Ivy Tech. This commute is made possible by the efforts of Ms. Canady, who drives the bus that transports 21c students to and from Ivy Tech. But Ms. Canady is more than just the 21st Century Charter School at Gary bus driver she is at the helm or behind the scenes of nearly every community event, a constant and consistent presence at the school, in Gary or as a chaperone of the 8th Grade Washington DC trip.

High achievers have the opportunity to graduate from 21c with both a high school diploma and Associates Degree in hand. Among the most recently graduated class of 2015, this feat was accomplished by Ariel Craft and Jamiah Cross. In 2014, three students graduated with Associates Degrees Ahronai Bandy, Shakira Burks, and Ms. Canadys daughter, Nyesha Canady.

At 21c, Nyesha was able to take advantage of the Ivy Tech dual credit program to hone her intellect and ambition toward achieving her goals. After graduating with an Associates Degree, Nyesha entered Ball State University as a Junior, and is completing a degree in Actuarial Science, with a minor in Computer Science.

The reason why I started going back to school was because of her, Ms. Canady says. When she would drive Nyesha and other 21c High School students to Ivy Tech, Ms. Canady remembers, Nyesha always said, Ma, you sit here in the parking lot, and you wait for us you could be taking a class in that time! When are you going to start? So I said, okay, and I started taking classes. Just one or two. And thats how it started. Once she completed a few classes, Ms. Canady took a career test, which pointed her to consider becoming a social worker. She started taking Human Services classes at Ivy Tech, and graduated in May 2015, one year after her daughter Nyesha, with an Associates Degree. Ms. Canady will continue her studies at Purdue University, where she will start taking classes toward a degree in Social Work.

We had this little rivalry going on between all of us, against my two other children, Ms. Canady says. We were competing for the highest GPA. At the end of the year, Danesha had a 3.7, Antonio had a 3.8 and I got a 4.0! Now, Nyesha graduated with a 4.2, but that was high school. We cant wait to see what achievements are in store for the Canady family!