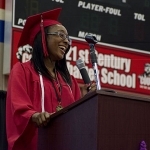 GARY | Joseph Harris stood in his cap and gown Saturday afternoon and hugged his father as tears streamed down both of their cheeks. “I’m going to the Army June 23,” Harris said. “I’m not going to have much time with anyone before then.” Harris was among the 30 graduates of 21st Century Charter School in Gary. His father, Jean Harris, said the teen held down two jobs while earning his diploma. “It was a rough journey,” mother Joyce Harris said. “We stayed on him to make sure he got his education.”

Many graduates spoke of 21st Century Charter School as a family. “Today is a day of family because the way I see it, my class is family,” graduate Anthony Benion said. “We fought, got along, didn’t like each other, but we love each other. They’re forever and I’m happy to call each of them my family.”

Principal Christopher Evans said some of the graduates were at 21st Century Charter School since it opened its doors at the current building in the city’s downtown.

“It’s the end of high school, but it’s the beginning of something greater, so please remember where you came from,” Evans said. “… Represent us well when you go out into the world.”

Evan said the graduates, “will always be our students, no matter how old they are.” “This may be the last time you are gathered together as a group, so you need to cherish and think about what you’ve done so far and what you will do,” Evans said. Linda Randolph, outreach coordinator for the Indiana Department of Education, encouraged students to be gentle with themselves. “Stay positive, because your words, your actions dictate who you are,” Randolph said. “Permit yourself to make mistakes. It’s OK, but make sure you learn from them.”