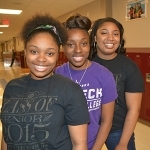 On Saturday, June 6, 2015 at the 21st Century Charter School at Gary High School Graduation, two teenage girls walked down the aisle with their High School Diploma in hand already having been awarded their Associates Degree from Ivy Tech Community College several weeks prior.

Their achievements were made possible by an innovative partnership between 21c and Ivy Tech Community College, in which 21c high school students have the opportunity to take college classes during traditional school day hours, for free and on-site at the nearby Ivy Tech campus. At 21c, all roads lead to college so it is school policy that in order to receive a High School Diploma, all students should be prepared for college by taking at least one class at Ivy Tech over the course of their high school careers.

But two students, Jamiah Cross and Ariel Craft, didnt stop there these girls earned a whopping 60 college credits from Ivy Tech, meaning they were awarded Associates Degrees from Ivy Tech before graduating high school. Education has always been a priority for Jamiah and Ariel. Both started taking college classes as soon as possible. Jamiah took her first class at Ivy Tech as a 14-year-old freshman. I started taking Ivy Tech classes mostly because of my teachers, Jamiah says. They told me it was a good idea, to get that experience early. Ariel transferred to 21c as a Sophomore, and started taking classes at Ivy Tech in the second semester of that year.

I thought it wasnt going to be too different from high school, Jamiah remarks. But it really was so different. At Ivy Tech, youre responsible for everything. When I was 14, I didnt have the self-discipline to be in a college course, but I learned fairly quickly that it was on me if I didnt get it together.

My favorite class at Ivy Tech was probably the IVYT Class the New Student Seminar, Jamiah says. That class gave me all the tools that I now use to get through my schoolwork. I learned how to write study guides, how to write papers, everything.

Both Jamiah and Ariel will attend the University of Northern Iowa on full-ride scholarships in the coming Fall, and will live together as roommates!

Jamiah plans to earn a Bachelors Degree in Psychology, and a minor in Business, and plans to become a psychiatrist. Ariel will major in Biology, and aspires to become a surgeon. Congratulations to these two outstanding students, we cannot wait to witness all that you achieve!