Cadavers, a Teen, and a Med School Dream 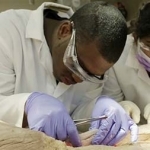 GARY, IND. — A 17-year-old Indiana high school student stands among the group of medical students, doctors and nurses working with a scalpel on a cadaver donor. His status isn’t obvious in the crowd, and his confidence seems to work as camouflage.

Johntrell Bowles has dreamed of becoming a doctor since a young age. His mother, he says, was diagnosed with mild congestive heart failure and deemed unable to care for Bowles and his siblings, so they live in a foster home in Gary. But despite the life-changing event, he did his best to turn the situation into an opportunity.

“I cannot change my mother’s illness, but I can help others,” Bowles wrote in an application to the 2014 International Human Cadaver Prosection Program at the medical school at Indiana University Northwest, also in Gary. His ultimate goal, he says, is to attend medical school.

Bowles was interviewed and accepted — deemed mature enough to handle a situation many people could not. During the summer program, which he is the youngest person to do, he helped prepare cadavers for the school’s incoming medical class.

Although Bowles felt confident, he still needed a little help.

Dr. Ernest Talarico, a professor and associate director at the medical school who also oversees the summer cadaver program, says Bowles was standing back when the cadavers first arrived. So Talarico did something a little unconventional to help get the young student more comfortable — a gesture done with respect, but also a little humor.

“I took his hand. I took the hand of the patient. I put their hands together. I said, ‘Meet your first patient, Johntrell,’ and I think he kind of loosened up,” Talarico says.

This is, after all, a place where volunteers can’t be shy about what they see, or smell.

After meeting his first “patient,” a term used for the cadavers to help relay their humanness, Bowles wasn’t shy about getting to work. This was an opportunity he didn’t want to squander.

Charles Swanson, Bowles’ high school science teacher, wrote a recommendation to get his student into the program and then ended up joining the program himself. He said Bowles has worked hard and overcome a lot to get there.

“There’s violence. There’s other things that would make any mission of becoming a medical doctor almost seemingly impossible. And I truly believe that he can be really successful because he’s not let all those things limit him,” said Swanson, who teaches at 21st Century Charter High School in Gary, where Bowles is starting his junior year.

To get to medical school, though, Bowles says he has to take care of many other things first, including taking the ACT exam in the spring.

“I’m not focused on medical school yet,” he says. “When I get to that bridge I’ll cross it. But right now, I’m focusing on this, I’ll focus on tomorrow, focus on volunteering at the hospital and take care of my family right now. And THEN, I can discuss my future.”