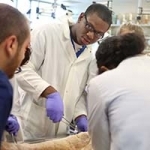 What you wouldn’t expect is to find a high school social sciences teachers also putting on the gown and gloves and taking scalpel in hand.

Participants in the program prepare body donors, referred to as “first patients” for the program, for the incoming gross anatomy class by removing the skin and body fat to expose the muscles and other anatomical structures. It’s the only such program in the United States to allow nonphysicians and nonmedical students to participate.

His opportunity came when he helped one of his students, junior Johntrell Bowles, apply to take part in the program. Bowles, who was living in a homeless shelter, said he initially wanted to study to be a nurse, but now is thinking about becoming a doctor. He said Velasco helped edit his application and encouraged him to include additional information.

Not only was Bowles accepted, but Dr. Ernest Talarico, IUN associate director of medical education and associate professor of human gross anatomy and embryology, offered Velasco a chance to join the summer program. This is the 15th year Talarico has offered it at IUN.

“I thought any type of knowledge is good,” Velasco said. “I think the experience will help me mentor the students more. I’m not just teaching social science but life skills. This program is so unique, I hope to help one student from 21st Century get into the program each year.”

The program also gave Velasco some insights into his father’s Parkinson’s disease. For Bowles, it has enhanced his experiences as a volunteer in the emergency room at Methodist Hospital Northlake Campus. The one lesson he and all the participants learn is respect for those whose bodies were donated.

Part of the program is a memorial service for the dead. In some cases, family members of the deceased attend the services, and, unlike other programs, the participants know the names of the people they are working on and some of their life story. Other information they learn from doing X-rays, MRIs and CT scans of the bodies.

“It’s a very humbling experience, especially when you know the people,” Brittany Winn, of Kouts, said. “We are treating the patient with the same respect we would a live person.”

“One of the goals of the program is to teach us and prepare us for the ultimate patient care when we are in the field,” Justin Golday, of Chesterton, said. “We know the names, the family history and sometimes we know the family. They are human beings with families and not just specimens.”

Winn has a degree in forensic science and plans to study physiology at Ball State. For her, the program is very personal because her grandmother was a body donor two years ago. Before that, Winn said she hadn’t considered a medical career.

“When Nana passed, we didn’t know where her body was going. We got a package from Dr. Talarico with a letter about the program and letters from the students thanking us and saying what an honor it was (to be able to study her body). It was very comforting knowing she was in good hands. It turned me around and inspired me.”

Both she and Golday are in the program for the second time. Others are in their third and fourth years, and Winn and Golday both hope to return. For Golday, it’s a tribute to his infant daughter, born with hydrocephalus, who died earlier this year after months in Riley’s Children’s Hospital, where he cared for her. He plans to study to be a physicians assistant.

“You can never learn everything no matter how long you spend studying,” Golday said. “Unless you are a medical student, you don’t see the things you see here. I’m getting a head start on my peers when I got into this program.”

Talarico said the 60 or so students this year come from Saudi Arabia, Mexico, Hungary, Nigeria, Argentina and the U.S. Past participants have included secretaries, lawyers, chefs, anthropologists and an Indian chief, who also was a taxidermist, along with those in the various medical fields.

While it might seem like gruesome work, Winn said it gives participants a unique look at the body’s inner beauty.

“It’s awesome to see how the body works,” she said. She has already signed up to donate her body to the program.